When my wife Nancy and my daughter Rachel suggested that I go along to their Creative Memories Scrap Booking Retreat at Sugar Creek Bible Camp, I didn’t really want to. They tried talking me into it by telling me of the ‘old barn’ and how many people actually attend different functions at the Camp. Children were going there by the hundreds, they said, and different groups had stayed there for weekend getaways. Finally, that and the great lodging and meals were enough to convince me to spend a few extra dollars for the weekend trip. 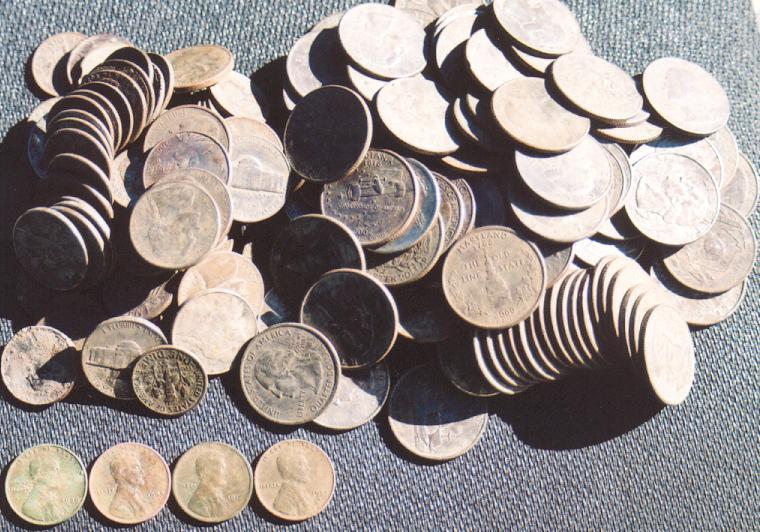 I have started a photo journal of good finds that I’ve made over the years since starting to detect in 1995. This outing would give me the chance to get caught up on the journal and detect an old homestead at the location. If you don’t already take photos of the places you have detected, and of some of the great things that you have found over the years, you should perhaps start. I know that a lot of detector users make display cases and have places set aside for all of the good stuff they have found, but if that is not possible because of space constraints, think about starting a photo journal. You can get out the journal to show interested guests at your home, or take it along to show potential site owners some of the interesting things that could be found on their properties. I also carry issues of Western and Eastern Treasures Magazines in which I have had articles published, and use those for references as well. 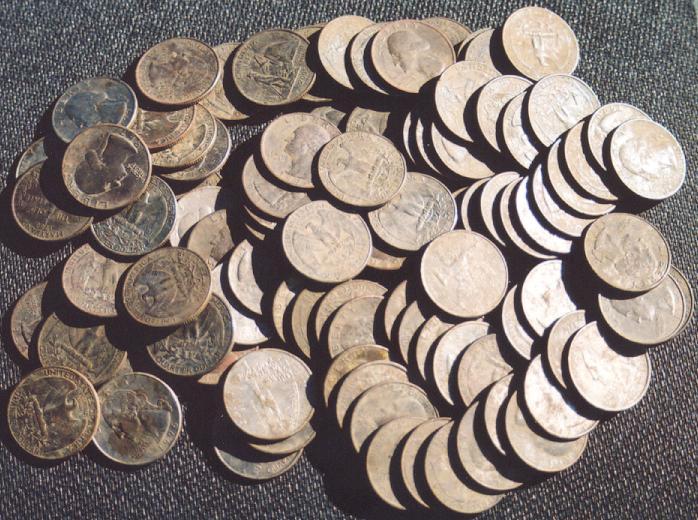 Sugar Creek Bible Camp was opened in 1976, according to Rachel, and she had never seen anyone detecting there. When Nancy and I arrived on Friday, the small group scheduled for the Creative Memories Retreat were already there. There were only five people in our group, sleeping in four different cabins. Each cabin had several bunk beds, futons, full sized beds and bathrooms with showers. Nancy and I stayed in our own cabin, while Marcella, Rachel and Sandy stayed in another cabin. The remaining two cabins remained empty in case people from other groups wanted to use them. We settled in and then went to the meeting room to get our photo albums laid out to work on their assembly.

I spent the rest of Friday trying to visualize where the coins would be on the property, and working on the journal. We broke for dinner at 5:00 and I asked the chef where I could possibly find some coins with my detector. Gene and his wife were very helpful and told me that the best place to find coins would be right in front of the dinner building. The other place that I might want to try was where the old house had been located, “That would be the place for some older stuff,” they said. They told me exactly where the house had once stood proudly on the side of a hill, overlooking the bubbling springs and the land below it.

Saturday started out with a good breakfast and then getting the XLT and my equipment ready for the days hunt. I started just swinging aimlessly toward the front of the dining hall and didn’t find much along the way, but when I neared the hall things started to pick up immediately. Gene had said that all of the children used the sloping hillside in front of the hall as a type of ‘arena’ for their assemblies.

The first couple of targets were easy to find… quarters were literally lying just under the grass. I found three or four before I even got a different signal on the LCD. An occasional penny, nickel or dime registered, and even these coins were only a couple of inches below the surface. I could not take a full swing of the coil without getting another signal to dig. It was truly the first time I had ever found that many coins in such a short distance, but even more significant was the amount of quarters found. I was trying to figure out why all the quarters were there and assumed that they were change from the coin operated soda machine. Soda was sold for 50 cents per can, and perhaps the children had all of the quarters for that purpose. It was the only explanation that came to mind when I began finding quarter after quarter lying in the grass.

I made just one pass in front of the hall and then proceeded to make my way to the area of the old house. I looked over the site and detected along the driveway toward a lone pine tree. I found one wheat cent, and it made me forget about all of the clad coins that I had found. I went directly under the tree and got a high signal that could only mean one thing – silver!

I dug the hole extra wide so that I wouldn’t damage the target. Turning over the sod revealed the silver band of a ring. It looked like a ‘nugget’ type ring that was definitely silver. I immediately tried it on for size, figuring I had found another ring that I could proudly wear. It just fit my little finger on my left hand; so, it must have been lost by one of the children. I spent another 45 minutes or so detecting the area, finding three more wheat cents and several more new coins before I decided to head back to our cabin. 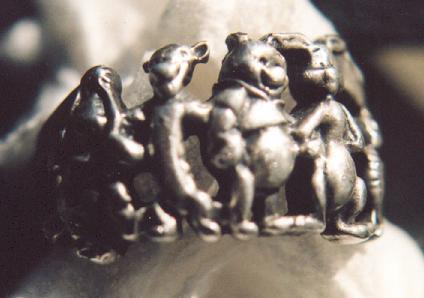 As soon as I reached the area in front of the hall, Bang! – the quarters started popping up again, one after another. I counted three quarter signals in one sweep of the coil. By the time I got back to the group that was scrap booking, I had quite a large hand full of coins. I told the story to the girls, and each tried to come up with an explanation of why the coins were mostly quarters. Of course, they had to look at the ring, too. Rachel said the lettering in the band ended in ‘ney’ but could not make out the rest. After I washed it off, she looked at it again. The ‘nugget’ look was actually silver shapes in the form of Winnie the Pooh and his friends. As you’ve probably guessed, ‘ney’ was the end of ‘Disney’. It was also marked ‘.925’ for sterling silver. I had amassed four wheat pennies, 18 Memorials, seven nickels, 12 dimes and 44 quarters in about four hours of hunting. 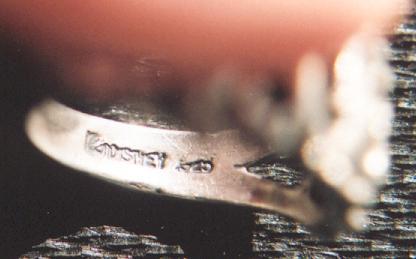 Sunday lead me back to the “Quarter Garden”. I wanted to see just how many coins could be found in an area that was about 30 feet square. I took my time picking up the coins, but I am sure that I missed a few. Gene and his family stopped by to see if I was having any luck. Gene’s son Caleb was interested in my detector, so I gave him a brief demonstration of how the machine sounded off over targets, unplugging the headset so he could hear them. I predicted a dime, and at about 1-1/2 inches the dime was found. I mentioned the fact that I could not believe how many quarters there were in the area, and was surprised that the signal that I chose to dig for them was only a dime. This is when I learned the real reason for the abundance of quarters in the ground. 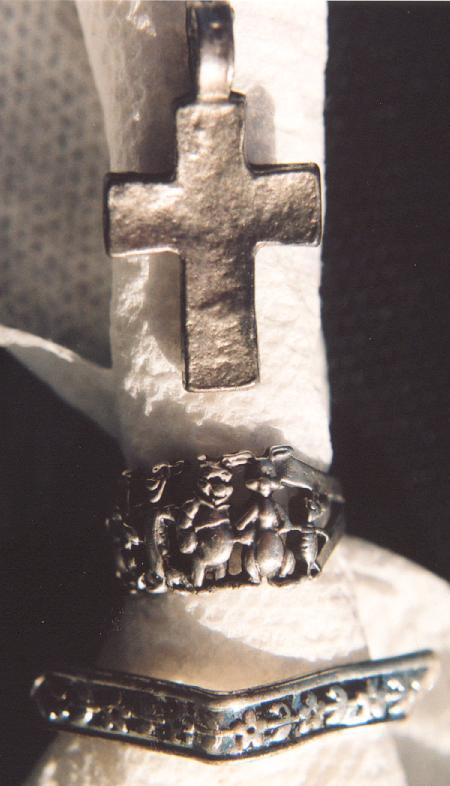 Gene’s wife stated that each child is given an allowance by their parents for spending money, which in turn is kept by the manager of the camp. At the end of the retreat, each child is given the remainder of the money, rounded off in quarters. “It is easier than having to give out smaller denominations of coins. The cash is handed out in envelopes.” Can you imagine a few hundred kids opening up the envelopes and having the quarters spill out onto the lawn? When I mentioned that there seemed to be more change near the bottom of the slope, they even had an explanation for that, too. “That is where the younger children sit; the older the children, the higher they sit on the hill.” Now it had all come together… the reasons all fit perfectly.

The totals for the small area that I covered were 28 pennies, 17 nickels, 23 dimes, and a whopping 99 quarters, for a total of 167 coins with a face value of $28.18 in about 900 square feet of ground, for about 6-1/2 hours of detecting time. Five of the nickels were located all within an inch of the other. (Perhaps they ran out of quarters that day.)

The earliest Wheat cent was dated 1919-S, and the ring was the only silver for the hunt, except for what looks like a squashed silver ring with a floral design. There are a lot more places at the camp to be searched, and in a few years there will probably be just as many quarters to be found on the hillside. By then I will need to up date my photo journal, so what better place than at the Sugar Creek Bible Camp!