Reprinted with written permission from People's Publishing, Inc. From the September 2006 issue of Western & Eastern Treasures magazine, pages 47,48 and 49

Treasure By The Yard

"Joann is moving to North Dakota and will be selling her home soon." my mother told me. I could visualize the way the house and yard looked when we'd had our family reunion there a few months earlier. Jo is my cousin and lives on the out skirts of LaCrosse, Wisconsin, about 40 miles from my home in Winona, Minnesota. With the price of gasoline climbing, the thought of driving 80 miles round trip put a damper on going detecting. 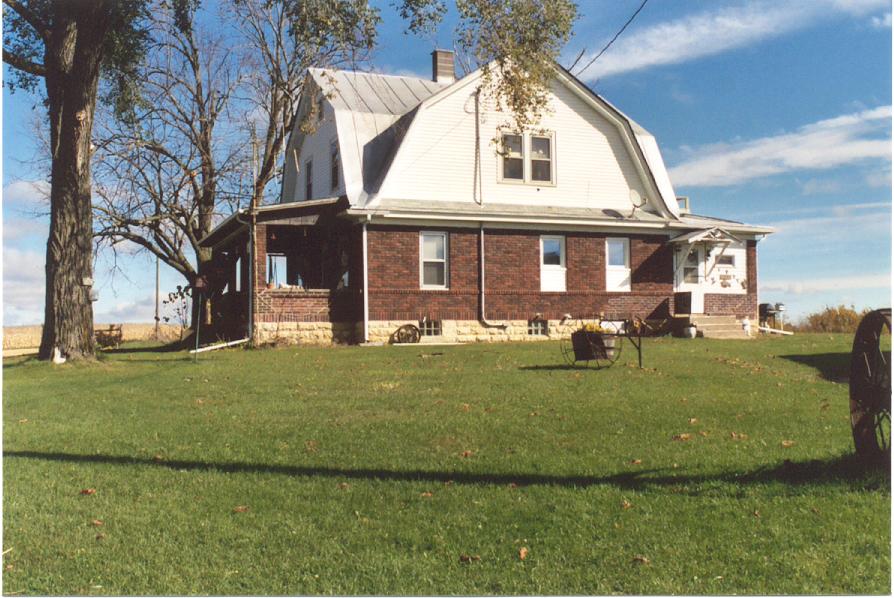 Visions of the home's limestone foundation and the spacious yard of green lawn won the argument going on in my brain about the expense of gasoline. Besides, I needed to break out the XLT to give it and myself a workout. I had asked for permission at the reunion, and it was quickly granted; but just to make sure, I called Jo again and asked if she remembered our conversation.

Jo told me to come out anytime and that if she was not at home, "Just go ahead, but I want to see what you find." I explained my method of sharing any valuables found. I determine the value of each item by researching it, and then I pay the owners of the property half of the value in cash, keeping the actual finds for my collection.

A few days later, I was on my way to the site. I had packed up my XLT, along with a White's Eagle Spectrum for a back-up machine, with nicads fully charged. Arriving, I parked the car and strolled to the front door to make sure that anyone at home knew I was in the yard. No one was there, but I had the necessary permission so I went back to the car to get my gear. Looking over the yard, I decided that just about anywhere would be a good place to start. I ground balanced the machine, swung the coil to ensure there was no metal present, then repeated the procedure to make sure the detector balanced properly and hadn't originally ground balanced on top of a piece of metal.

This is always a good practice when starting to detect at a farmhouse, as there usually are lots of nails, bolts, cans, and other metal items in abundance throughout the lawn. Farm equipment and cars are often worked on where there is soft grass to lie. For this reason, I ground balance in the normal way, then re-balance in an area where I have checked to make sure there is no metal present.

After only two swipes of the coil, I had a good target pinpointed. "This is going to be great," I thought. A newer dime was just under the grass, and was soon tucked safely into my pouch. Another swipe of the coil and another coin - this one a little deeper. It was a newer Memorial cent. My hopes soared, and I had visions of finding a lot of older coins as well. 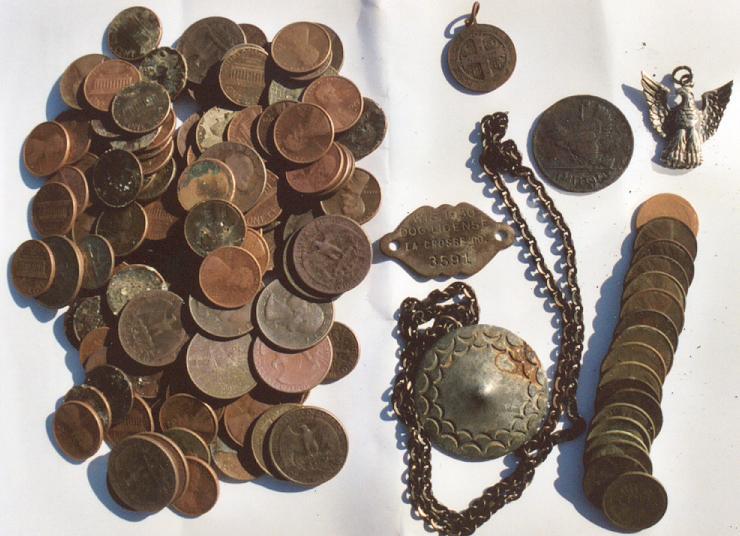 Working from my car to the house, I found about 10 coins. The only bad thing was that they were all newer coins. Even these registering at 5" were clad and dated later than 1965. On that first day of detecting I found eight quarters, seven dimes, three nickels, and 28 memorial cents. Some were as deep as 7", and each raised my hopes high for at least a Wheat cent.

Eventually, I got discouraged and started skipping around to find that hotspot where the good stuff was hiding. I searched in front of the main entry and then moved to the side yard, hoping to find a Wheat cent or even silver. Then on a good signal I turned up a 1940 cent followed by a 1935-D. However, it was getting late, and I decided to call it quitting time.

A few days later, I just had to try to finish off the yard. The fact that I had found two Wheats made me think there had to be other treasures to be found. I picked up where I had left off and started finding the newer coins again. This time they were surfacing at a rate of two or three at a time. In one spot I found two quarters, one dime and a nickel. At that rate, I could stay a little longer and take my time. I also found a 1930 dog license tag from LaCrosse, County.

Hunting on, I started finding Wheat cents and, yes, silver - not a coin, but an eagle pendant or charm that gleamed as if it had only been lost the day before. Nearby, a necklace turned up, marked "Pewter - Jergen Jensen - Denmark - 53".

On a deep signal that read "quarter" at 7" a thin half dollar-sized coin or token turned up, but it was definately not silver. I carefully removed some of the excess dirt and could see a chicken or grouse. This made me think that it might be a token, but after cleaning it I could make out a harp on the reverse. I remembered seeing a coin like this in the Standard Catalog of World Coins and it proved to be a penny from Ireland dated 1942. How did this one get here? Could it have been a souvenir brought home by a WWII Veteran?

The next detecting outing in the yard was to be the final chapter in this adventure. I had to finish the front yard near the sidewalk, where I expected to find more coins. There were times when the coins were so close together that the XLT could not pinpoint one individual coin. When the pinpoint trigger was held, the machine would respond over a very narrow line, sometimes over 18 inches long. I found that by listening closely to the tone of the machine at one of the ends of the signal, there was a discernible change in tone in three of four directions. I then centered the coil in the center of the "T" and dug. Sure enough, there was the coin. I would repeat the process until there were no more signals, uncovering up to four coins in a straight line.

The final coin count for the entire yard was 135 coins! I have found this many in parks and playgrounds, but never before at a family home. There were 116 newer coins ($7.61), 18 Wheat cents, the Ireland penny, a religous medal, the dog tag, the pewter necklace, and the silver eagle pendant. 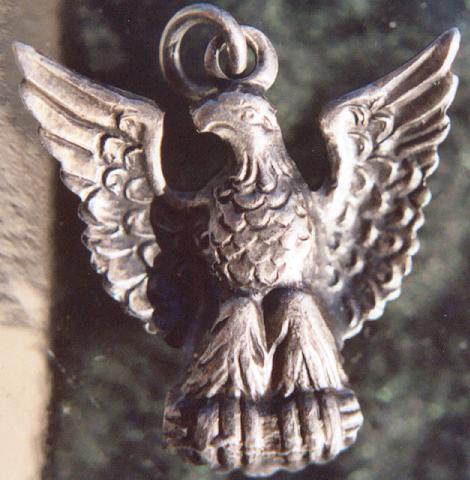 A silver coin or two would have been nice, but I'm content to add the eagle and the Irish penny to my ever-increasing collection of keepers. The clad coins are put into a jar and counted at the end of the year to purchase a more valuable coin from the local coin shop. The Wheat cents will be sorted by dates and kept for now. Although there is no market for them yet, perhaps in a few years someone will be collecting them again. Thanks again, Jo, for letting me search your yard.