“I think I should be out more often with my metal detector,” I said, when asked what I have been doing since my retirement. Georgine had heard my comments and started asking the usual questions: “How do they work? Where can I purchase one?” Then basically, “How can I use a detector?”

I replied that I would bring two metal detectors out to the site and show her how to use the best machine. Then she could detect and keep whatever she found, but I would use another machine and keep whatever I found. “George” agreed, and I gave her my phone number and told her to call me. After all I am retired with all kinds of spare time. 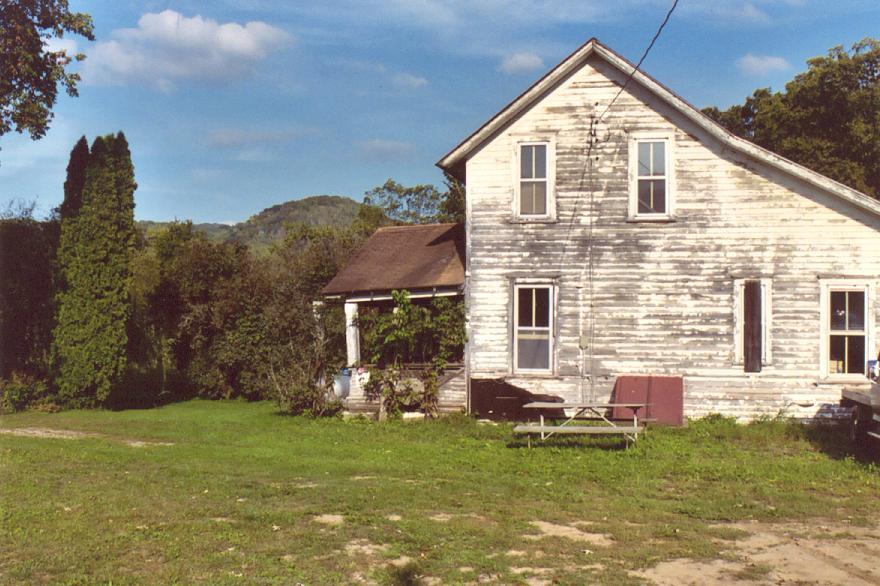 The following Tuesday was the first day of detecting. The house is fairly old, possibly built in the 1920s according to Georgine. Unfortunately, the yard looked as if it was covered in gravel right up to the door, and I had some doubts about it. I certainly didn’t want to spend all day digging through 6” of rocks to get to a Memorial penny. Then she showed me the clothesline and suggested that we start there.

Using the White’s XLT to “train” George, I showed her how easy it is to start it up. Just push the “ON” pad, load the custom program, and then ground balance it. Now all I had to do was try to find a good target. We started off finding the usual junk and foil scattered everywhere. The junk was dug anyway, to show Georgine how to pinpoint and the correct way to cut the sod in a semicircle, folding it back to expose the dirt below. Several targets were recovered as we concentrated on the display. “See how it registers at 36, then 32, then 34 as I’m moving the coil over the target area?” I said. I predicted that it was a pulltab from a can, and the prediction was close. It was actually a wad of thick aluminum foil.

Searching for several more feet, we finally got a strong “quarter” signal. I stopped long enough to show her the readings on the LCD, trying to focus her attention on the numbers, and then on the solid bars on the right of the scale. After we pinpointed the target using the DC phase of the machine, I let her dig the hole… and she made a real mess. “It’s my yard!” was all that she said, and she continued with the excavation. I started in on the stories of some of the immaculate yards that I have detected and suggested using a drop cloth for the clean recovery that keeps property owners happy. The quarter was a 1979-D and nothing that I would brag about, but Georgine was now on the move, eager to find another coin.

I helped with a couple more targets, continuing to give advice on how to swing the coil, maintain a pattern, and pay close attention to what the machine was telling us. She was willing to dig even the bad signals, just to see what is in the ground. We found some more foil, rusted tin, and some large iron for her to practice on. Once she got going well enough to pinpoint and remove a target, I grabbed the other machine and started detecting in another area. Soon Georgine’s mother arrived at the site to watch us. Boy, if I had thought that Georgine was hooked on the hobby, you should have seen Mom! “We just have to get one of these. How much do these things cost? Where can I order one just like yours? This is fun!”

The two of them were having the time of their lives, unearthing all kinds of junk. They were laughing and digging holes everywhere, whenever the XLT would beep. I, on the other hand, was concentrating on the White’s Classic. It is an older model and has to be used by tone identification. With a little time to refresh my memory of how to use the machine, I started making my share of finds, too. 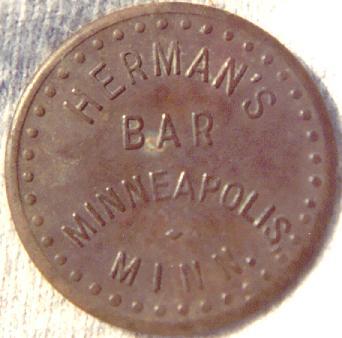 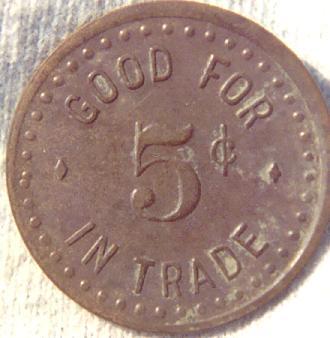 It didn’t take long for George and Mom to come over bragging about a token they had found near the house. It was a “Herman’s Bar – Minneapolis Minn.” token, “Good for 5 (cents) in Trade” - not a very valuable but another conversation piece for them to treasure.

Next we moved to the porch side of the house, where I decided to give George some more pointers on the proper use of the machine. We found a good signal that registered in the plus 80 range even while pinpointing in the DC phase, which usually means a silver dime. As Georgine dug the hole, I could see the outline of a silver dime in the black soil. “Congratulations! You have just found your first silver dime!” It was a 1942-D Mercury that looked to be in Very Fine condition. Well, that was all the coaching she was going to get from me!I managed to find a piece with a Boy Scout emblem on it, with the motto “Be Prepared”. It was a collapsible drinking cup, 2” in diameter and ľ” deep. 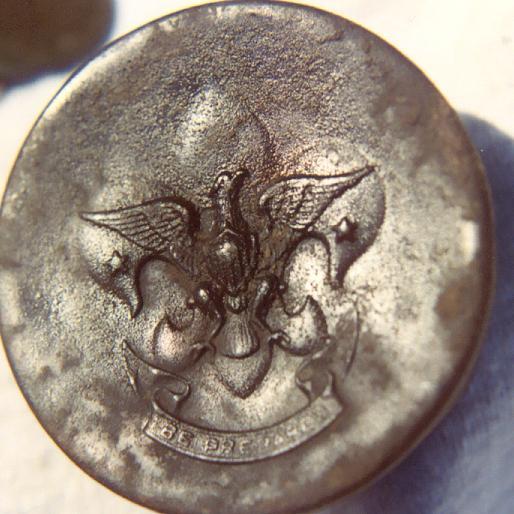 About five minutes later George came over with an Indian Head cent dated 1907. It really got everyone excited to think that there were old coins buried in the yard. I took the coins home with me to put them in 2x2 holders and to clean the dirt off and put them in 2x2 holders. We made a commitment to meet again the next day at Mom’s home. It seems that her house was a hotel of some sort in the early 1900s, and we were welcome to detect in the yard.

The home is a two story white house that had another large area of gravel, and a yard having the look that said a lot of extra work had been done - not a good sign for a detectorist who spent the last few hours visualizing a spacious hotel with an area for guests to relax. We started detecting near a large tree in the front yard, where we found several Lincoln Memorial cents that were buried about 4” deep. These provided more training for Georgine, and I must say that she was improving on identifying the good signals. 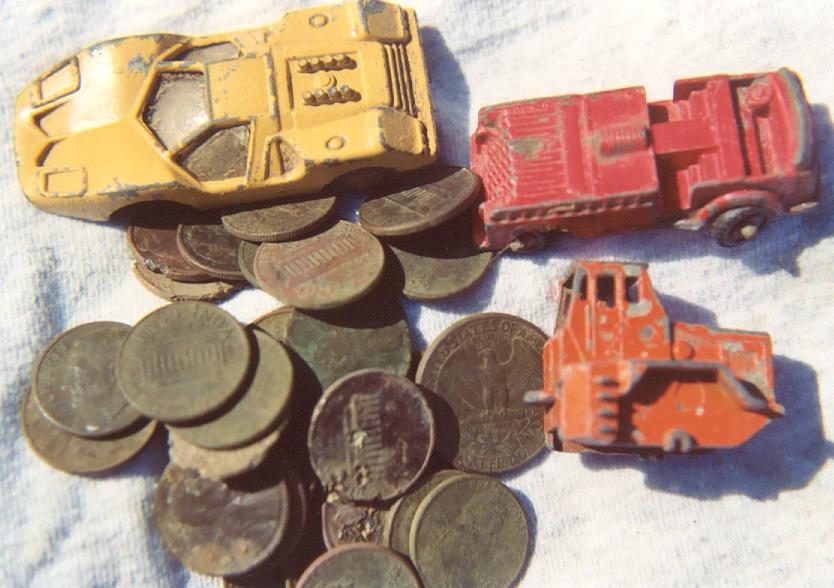 Moving to the side yard, we found a few more clad coins. I was beginning to become impatient, but Mom convinced me to try behind the house. I found three toy cars in a short period of time and was told that this spot is where her children had played in the lawn. Georgine was also having some luck finding a few toys and needed my help finding another target. It appeared to be one of these large targets that registered in the “coin” range. Listening carefully, I determined that there was more that one target in the area. When one signal barely started to fade, I backed up to the louder tone to make the ‘X’ over the target. This allowed us to find one penny then another coin just a few inches away from the first.

Georgine handed me the XLT to find more targets, while she would dig targets as I pinpointed them. I set up a pattern near the house and on the second pass pinpointed a 1907 Indian Head cent. Now we knew that there were indeed old coins in the general area, but we would have to return another time to resume the search. For now, George wanted to continue until we had found at least one more target that was better than average. So, we went back to the large tree and got a solid dime reading. In the soil was a silver religious medal, which Georgine said that she collects.

I made another trip to the first site on the next day and found an 1898 Indian Head cent in excellent condition. A few other newer coins also surfaced, but not very frequently. Georgine didn’t make it that day, but she called later to say that she had permission to detect the yard of Ed and Nora, who are her neighbors. We set up a time for early in the next week. 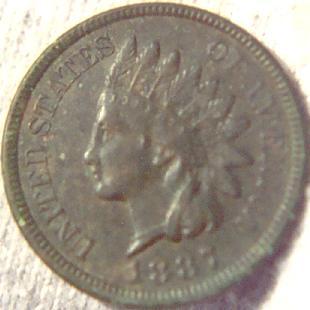 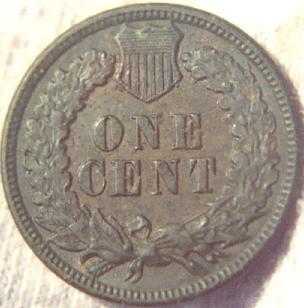 As Georgine started near the sidewalk, I said, “See that huge pine tree? I’ll bet that it was a good place to cool off in the summer heat.” The Classic sounded off with a good tone, and the first signal of the day was an 1887 Indian Head cent in About Uncirculated condition. Three more Indian Head cents followed - 1899, 1901 and 1902 - all within a few feet of the other. A 1942 Mercury dime also surfaced, and we realized that there were more to be found on another day.

The good coins are out there for us to find, and since I’ve written this article, Georgine has purchased an XLT for herself and is off and running. She has shown me a 1906-S Barber dime and a 1937 Mercury dime found on a boulevard in a near by town. She also managed to find another religious medal and wants me to program her machine similarly to what I have created in my custom programs. We will be detecting more in the future and hopefully will turn up more of these older coins.