The old park has been in existence for quite a few years now. I have personally detected there since 1997, and even today it seems that there is usually another good coin to add to the collection. It is hard work, but I guess that if you want to find the good stuff, you have to sometimes work for it. In fact, I make it a requirement to visit the park at least one time near the end of the season of metal detecting.

When the leaves are falling off the trees, covering the ground in red and yellow, there are very few weeds to contend with. This makes it an ideal time to swing the coil freely, with out raising a cloud of mosquitos when brushing the soil. I have tried to detect in the area in the summer, only to be driven out by swarms of them. Evidently, they love the smell and taste of the mosquito repellent, because it sure doesn't seem to bother them to bite through it. 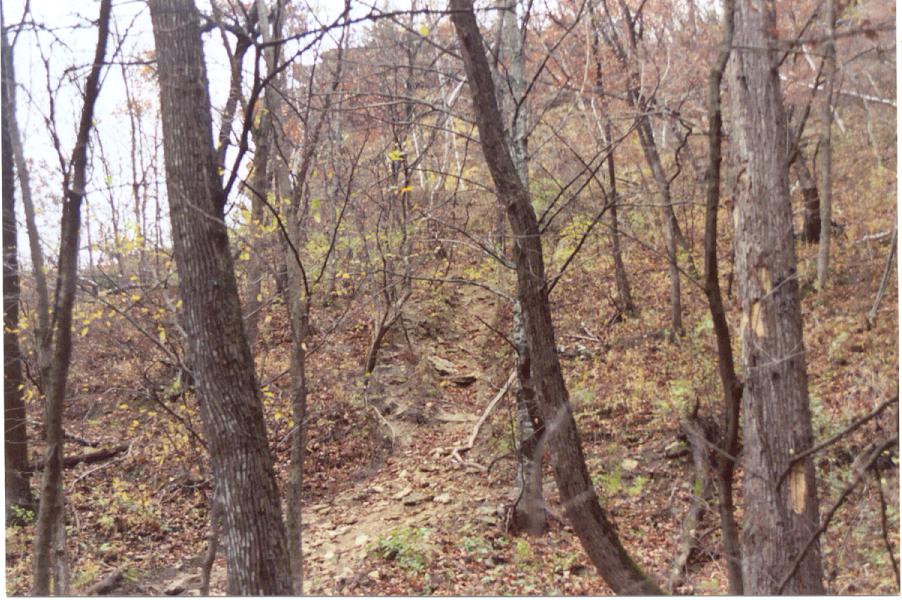 I told myself to try again where I had found an 1892 Barber dime last fall. There just had to be more good coins out there. I just needed to try harder and do a little climbing. It's not easy to climb up a steep incline while carrying a detector and other gear, but I took my time and swung the coil with about every other step up the hill. I worked my way up to the area where the Barber dime was found, dug a few rusted beer cans and bottle caps, and then got a signal that registered 'iron' on my XLT's liquid crystal display. Looking down, I immediately saw part of an iron shape above the ground partially covered by a few leaves. 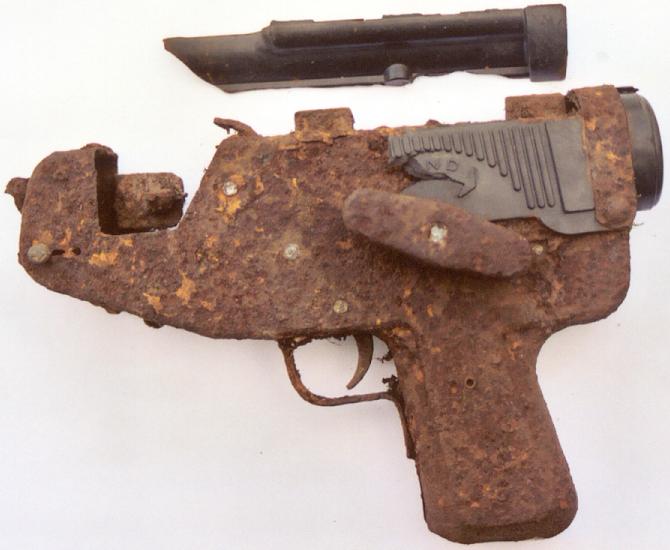 I picked it up and saw a trigger and the shape of a gun - a toy gun with a wind-up knob on the front side of it. At one time it must have been partially covered with plastic, some of which was still clinging to the barrel. Thinking that it would make a good conversation piece until my wife Nancy threatened to toss it out, I tucked it into my pouch.

I continued to make the climb, finding a few Memorial cents and a clad dime along the way. The signals got me excited, just thinking of the older coins I might also find. I followed a trail that has been worn and washed out to a depth of about 5' in some areas, making the ascent a difficult task to say the least. It was a long climb for just a few cents, but at least my curiosity was satisfied about the trail that lead to the top of the bluff. I now knew that there was little, if anything, to find on this particular trail besides rusted cans, broken glass and pulltabs.

Picking a suitable trail to go back down the hill, I followed another path where it looked as if someone had taken a slide down hill about 20' or more. I didn't want to suffer the same sort of descent as that unfortunate soul, so I walked a little farther along the trail, finding a more desirable exit from the limestone cliffs.

At last I made it to the bottom of the bluff, where I entered the trails that are kept clean and accessible for hiking. Hearing a group of people following the trail, I got out of the way by moving into a small, flat area to detect. The group of four stopped to ask if I had found anything. I politely replied, "Nothing but a few newer coins," but added that my hopes were still high and told them about the Barber dime I'd found last year.

We continued on our separate ways, and I detected the area, finding a two more Memorial cents. As I searched, I kept thinking that there must be some other flat areas where people could have stopped to rest. I found some spots that looked promising but had no luck. A few more Memorial cents surfaced, and each one was surrounded by rusted cans. I had to really concentrate to even find those coins.

Pieces of rusted tin can give a signal similar to a coin when first detected. Running the coil repeatedly over the spot, I watch the LCD for its response. If the readout varies too much, it starts to raise my suspicions. When pinpointing, I use the DC Phase feature of the XLT to help identify the metal in the ground. If I get a negative reading, the metal will generally be one that is not wanted. If it is a deep signal of more than 4-1/2 inches, I dig all of the positive numbers and even some from a negative 40 toward the positive scale. If the metal is a coin or other desirable metal, the numbers will be consistent while detecting and will be near the positive scale when pinpointing.

As I was making my way down the trail, the family of four came back in another direction from the top of the bluff. I had never seen this trail before, yet there it was. The children of the group were leading the way, kicking up leaves and brushing them with small sticks they had picked up along the way.

Approaching me, the youngest piped up, "Did you find anything good yet?" I responded by asking what she had found. "A stick?" was her reply. When the rest of the group caught up and surrounded me, I pulled out the rusted gun for show and tell. They each looked closely at it and made comments about how much fun it was to find such a treasure.

After they left I looked at the trail that they had traversed to arrive to my area. I decided to give it a try and see where it could end up.

I had detected no more than 20' up the trail when I got a good "quarter" signal right in the middle of the path. The depth read only about 2", so I assumed that it would be a rather new coin. However, when I flipped up the soil, I immediately saw the rim of a silver quarter. This always makes me slow down, taking care not to scratch the coin carelessly.

Picking it up, I immediately saw the face of a Barber quarter and could read the date of 1896. The old park had rewarded me with another keeper after a few hard hours of work.

The trail winds farther up the side of the hill, and some other people passing by told me that it intersected several other trails in the small valley. These trails have been in use since the park first opened, so I am sure that there are other coins to be found. 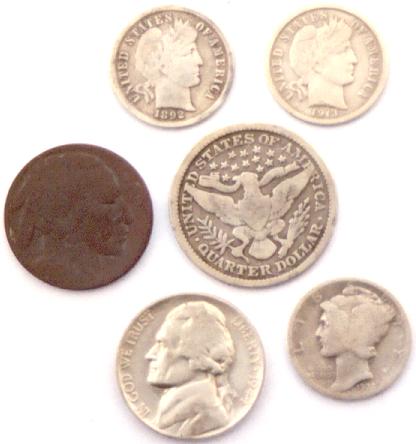 Sometimes the better coins are found in out-of-the-way places that are not so obvious to the casual detectorist. That is why some of us take to the woods to find areas that have not been "detected to death". There are times when we spend hours climbing the trails and woodland to find just a single coin. My recoveries here include a 1944P silver "war" nickel, 1917 Buffalo nickel, 1892 Barber dime, 1913 Barber dime, 1924 Mercury dime and the 1896 Barber quarter mentioned earlier. On one particular trip, I even found an ox shoe with the nails still intact.

Six days after finding the Barber, I went back to detect the trail near the other end of the park, where there are some old grills and flat areas for a picnic. The spot was heavily covered with leaves, making it hard to swing a coil. Surprisingly, though, there was little trash to contend with. Near the end of one of the grill areas, I got a good "dime" tone and recovered a 1939 Mercury dime. I continued to search the area hoping to uncover some more coins, but found none.

I detected in the park for three more hours, following another trail only to find a 1970 dime and a 1926 Wheat cent. On the way back, I decided to stop at the grill area again and try a more thorough search. A good "quarter" tone rang in my headphones, and the LCD indicated a quarter at a depth of zero inches, but it also showed "overload". This generally means a tin can.

Using my digging tool, I carelessly dug a hole, expecting to uncover the can. The target was definitely not what I expected, but turned out to be another Barber quarter, dated 1899, just barely under the leaves. This was two within a week!

I will definitely have to make more trips back to the park.