Even though I'm retired, I worked part time at my old place of employment a few weeks last year, and managed to earn enough extra cash for another trip to Hawaii. This time our destination was the island of Kauai, one of the northernmost isles in the chain. In fact, the Kilauea Lighthouse and bird sanctuary there are considered the "Northernmost Point of the Main Hawaiian Islands". However, that "northern expose" didn't get me down as the average temperature during our visit was a balmy 78 degrees - compared to the "high" of about 30 degrees in my home state of Minnesota.

Kauai is known as the Garden Isle and it's easy to understand why. On some parts of the island the average rainfall is 400" per year, and is considered the "wettest spot on earth". It was reported that one city on the island had over 22" of rain in only three days while we were there on our 12 day vacation. There were high winds, high wave and flash flood warnings throughout the island during the first week of our vacation. It even made the Weather Channel news, causing several of our friends back in Minnesota to wonder how we were doing. Homes were flooded, roads had to be plowed out, and some of the beaches were choked with logs and debris.

I didn't realize it at the time, but this stormy weather would aid in some of the finds I made during our stay. In the short term, though, that type of weather definitely puts a damper on a guy who has nothing on his mind but metal detecting. I had packed two detectors to make sure that the bumps and jostling at the airport left at least one machine in working condition. The machines arrived when we did, and I was glad to find that both of them were in fine shape at our destination. 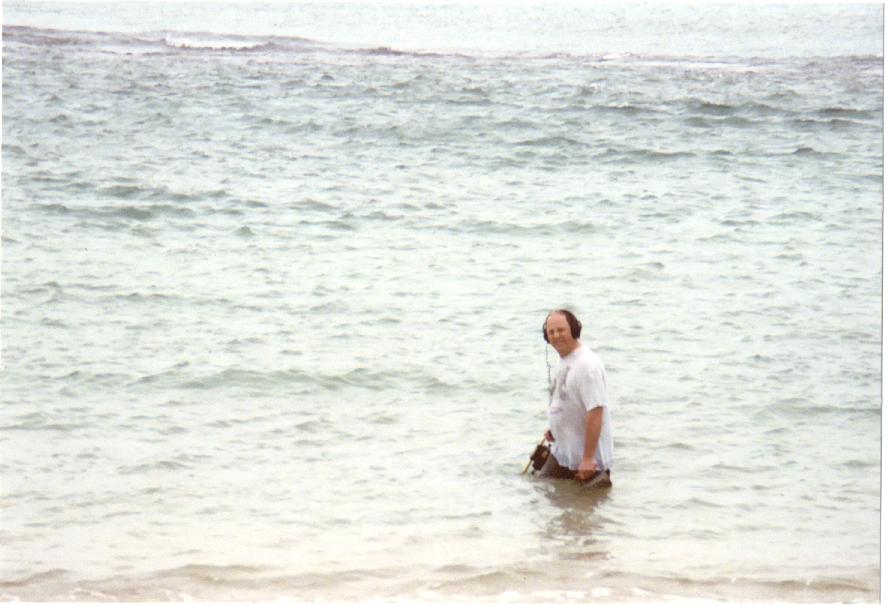 When the rain finally stopped and the sun actually peeked through the clouds, the action picked up fast. Sunbathers swarmed the white sands to find that perfect spot to lie down. My wife Nancy, my mother-in-law Marcella and I walked to the beach, the first thing I noticed was another gentleman swinging a coil over the sand. He said he had found a few quarters and some other coins, and explained that he had gotten the machine for Christmas. This was the first time he had used it. I gave him a few pointers and we went our separate ways, but I couldn't help feeling a bit envious that I had not been there first. 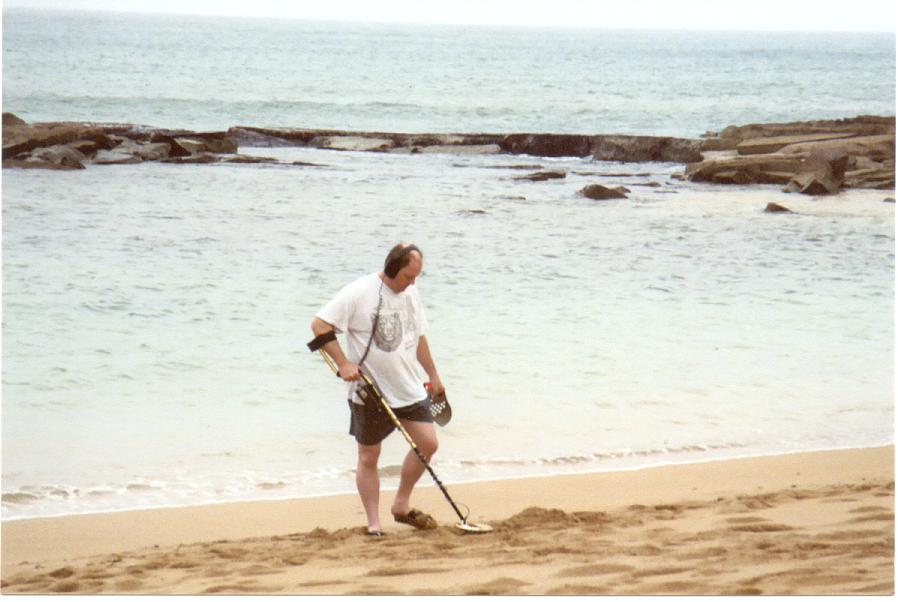 I waited until the area had cleared of sunbathers before checking out the beach during the evening hours. There was just enough light from the Marriot to confirm that I could detect after dark - and to reveal that someone else was swinging a coil on the same section of beach as the daytime detectorist. There was no pattern in his searching, either... he was using the "hit and miss" method of detecting. When I stopped him and asked if he had any luck, he responded by saying he had found very few coins but managed to find a "couple of quarters and other coins", the same as the other guy.

My turn came the next night. This was the ideal time because there were very few people on the beach. I started at the edge of the sand and worked toward the water, dragging my feet as I went. This leaves a trail that shows exactly where I had already searched. My White's XLT must have been balanced properly, because the first signal was a penny that took about three deep scoops to finally find it. The coin was in bad shape, totally encrusted with sand and about 1/4" thick. The granules of sand become embed in some coins and are virtually cemented one on top of the other. As a result, the coin is still about the same diameter, but very thick. It was impossible to determine exactly what the coin was, but its size indicated that it must have been a penny. 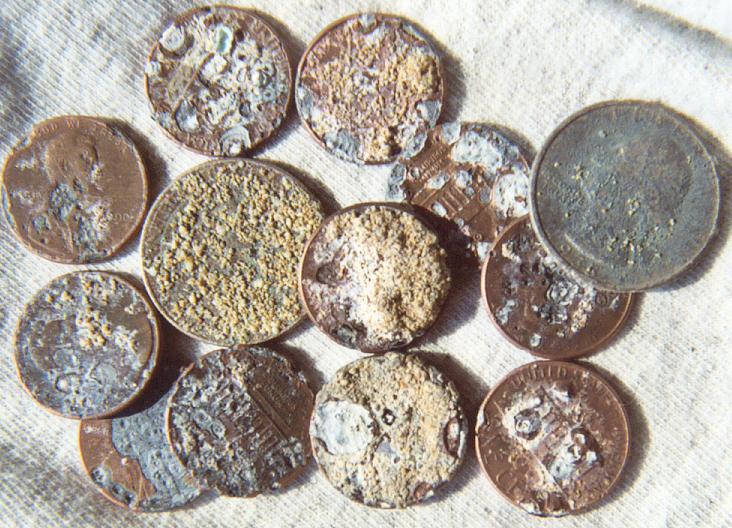 I started finding more coins, at least enough to realize that the other detectorists hadn't found everything. When rain drops started to fall, I had detected for about 1 1/2 hours. Finding five quarters, six dimes, and 14 pennies in that amount of time kept my hopes up for a better day. I now knew that there was still more to be found. My next outing was on the second leg of our vacation, spent on the eastern shore of the island, on Kalapaki Beach inside of Nawiliwili Bay. The first visit to the beach with my machine was in the daylight hours, and there were very few people; but sure enough, one of them was another detectorist was working his way along the shoreline. I started my search pattern and found two quarters, six nickels, three dimes and 24 pennies, most of them near the catamarans on the edge of the beach. I assumed that the coins were dropped by people pushing the boats across the sand.

The vacation was going fast, and I still had found nothing of interest. We drove to Lydgate Beach Park, where there is a walled in area to protect it from the waves. This allows shallow water and sand to build up for wading. At least that is what I thought it would be. Unfortunately, the beach wasn't really a beach anymore... it was totally jammed with broken logs and drift wood. It was impossible to even see the water in the ponds. Crews were busy at work, trying to clean up the area, so we left to visit some other sites. 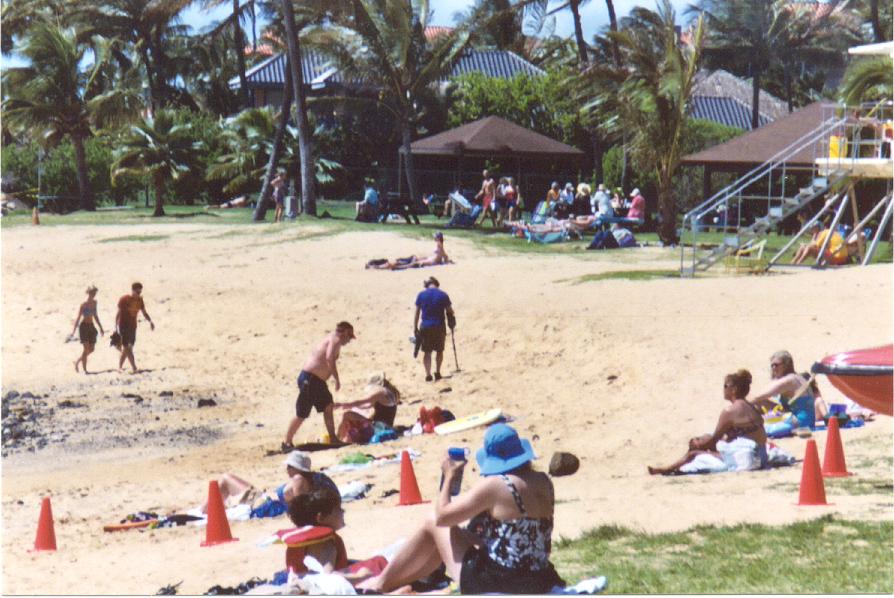 The next day we took the drive back to Poipu Beach on the south shore for another try. This area was free from logs, but there was a deep cut in the sand just in front of the lifeguard station, leaving the area free of sunbathers. I have read the stories about our eastern shores on the mainland after a nor'easter, so I used this information to detect the cut. I searched just below it and even up the sides, finding several coins. One in particular caught my attention immediately because I saw a buffalo on the reverse. The nickel was too corroded to see the date, but I had found enough Buffalo nickels in my time to know that this was an older coin. 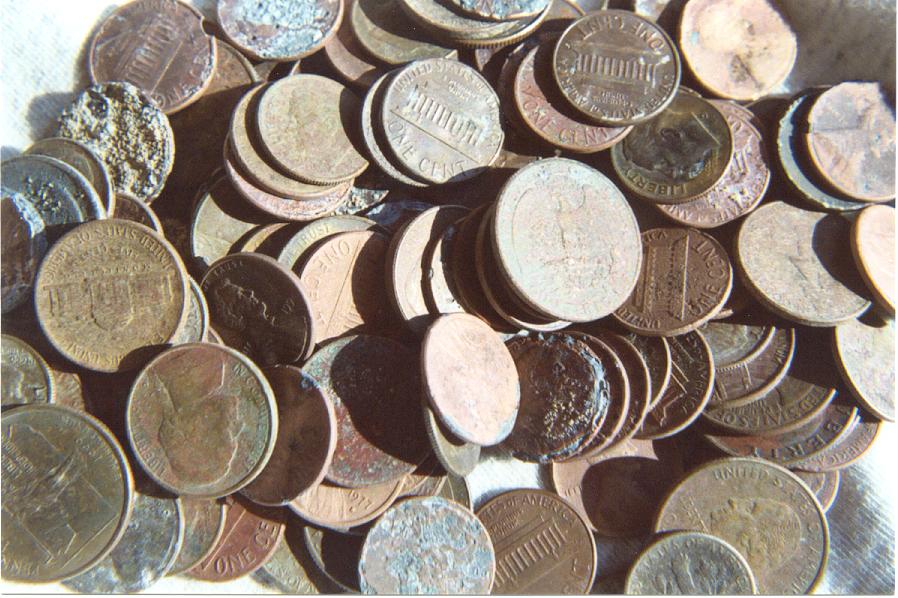 As I was searching closer to the waters edge, a young boy came over just as I was digging another signal. I could see his excitement as I kept digging deeper and deeper into the sand. When the target was finally in my sand scoopand we saw it at the same time, he exclaimed, "A ring! Can I have it?" I hated to disappoint him, but it was the first really good thing I had found on this vacation! I had to keep it even though it was just a junk ring. I guess he understood, because he left me alone after that. A short distance away from that spot, I recovered a sterling silver toe ring. This gave me two rings, the Buffalo nickel and a hand full of coins to show off to Nancy and Marcella.

On the last day of our vacation I went back to Kalapaki Beach to search in another area, and the first signal of the day was to be the best find of the entire vacation. It wasn't much, but Nancy has worn it a few times since we came back home. It's a sterling silver band with a wavy design like the waves that are always breaking on the shores of the islands - something to remind us of the trip and perhaps encourage us to take another trip in the future. After all, I still have to find a gold ring on those beaches. 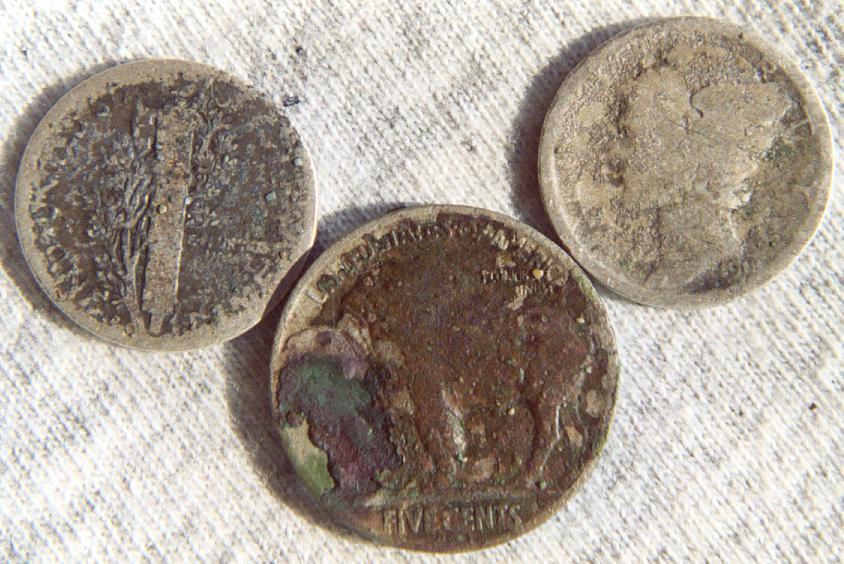 When we returned to the cooler weather of Minnesota, I got out the rock tumbler to clean some of the encrusted sand off the coins. Closer inspection revealed a 1935-S quarter, and two Mercury dimes, a 1918 and a 192? The Buffalo nickel proved to be a 1927-S. The most unusual coin, about the same size as a nickel, is a 25 Kopijok dated 1992 from the Ukraine.

Hawaii became a state in 1959. Could these older coins have been lost prior to statehood, or even prior to the bombing of Pearl Harbor? How many more are still buried deep in the sands on the beaches of Kauai? Perhaps you should go and find out. I was detecting for only 6 - 7 hours during the entire trip and found 122 coins and three rings. Who knows what the payoff might be for a few days or more of serious searching?