Retired And Rarin' To Go!

I'm always ready for another detecting adventure, even one prompted by retirement. Yes, I finally made the retirement date, and as a "reward" for my hard work and years of service, a trip to Hawaii seemed like a once-in-a-lifetime opportunity. My Mother-in-law, Wife, and I were to spend ten days in the land of volcanoes, flowers, tropical forests, sugar cane, pineapples and yes, BEACHES!

Our travel agent laid out the plans and accommodations for flight and car rentals. We just had to pack, and take care that my detector was the first 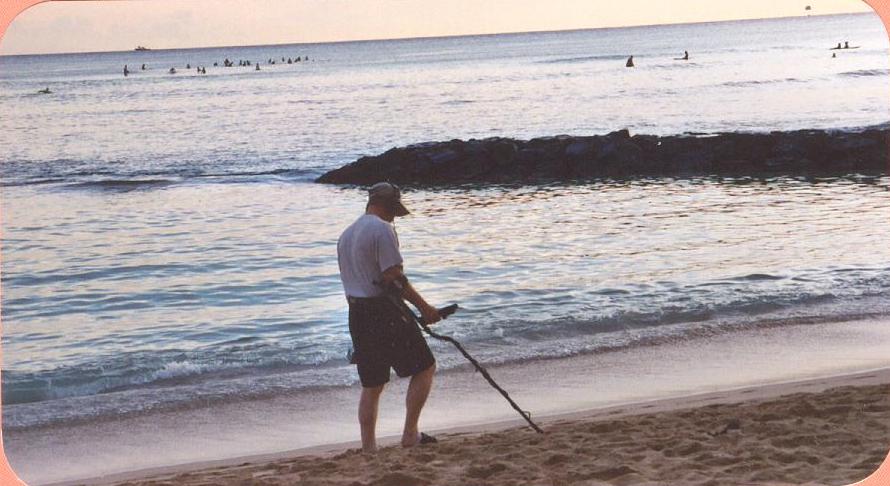 piece of luggage checked through the security system. I took precautions to pack my White's XLT and parts of my White's Classic in the hard carrying case. If the XLT should have any problems, the Classic would be ideal as a backup detector.

The security agents at the airport were friendly and checked my luggage through without a hitch; the hard case was padlocked with a TSA lock that is acceptable. These locks can be opened with a key by security for inspection and the case went on as "luggage". I don't know if they would have allowed the case on the plane as "carry-on", but I didn't want to take the chance that security would not let it on board with some sharp equipment.

Following a long flight, we arrived in Honolulu with all of the luggage ready to transport to the hotel. As we drove along Waikiki beach, I could see the crowds of tourists basting in the mid-day sun. I wondered when I could get there with a detector to try it out.

After scouting out the beach activities, and sightseeing tours for two whole days, I finally arranged to take the machine out just before sunset. While Nancy and Marcella watched a hula show near the beach, I detected along the shoreline, trying to stay out of the picturesque view as people watched the sun sink into the ocean.

Surprisingly, I found only a few coins on the first outing. I searched a small area, just trying to adjust to the sand conditions. I thought I had the batteries fully charged, but I got a "Low Battery" reading on the LCD when I turned it on. I could still get a signal in the headset, but could not get a good read out on the Display screen. However, I decided to keep trying and dig every signal.

After several passes in the sand and couple of minutes later, the first good "tone" registered. I pushed the scoop into the sand and after only a couple of shakes, had my first coin, a U.S. cent. I should have kept that one separate from the others, but decided that the gold rings would be enough of a "souvenir" to remind me of my detecting experiences on Waikiki.

The next coin from the sand was one that I knew was foreign, slightly larger than a quarter, a 10 schilling coin was a keeper to put into the coin collection. I save all the foreign coins that I find and put them in holders for viewing pleasure. It was a good start, and I thought about all of the different types of coins that I could possibly find here. There must be thousands of different coins to find on such a large beach, with about 2 miles of sand to sift through. It is a good feeling when you actually find things you want to keep.

The next good target was my first piece of jewelry on this Hawaiian hunt. It wasn't much to look at, and is what I would consider a "junk" ring. It has an

adjustable band with a "silver" base holding about a dozen red stones and one center blue stone. There are no markings, and tell tale traces of rust on the band leave no question that it's just an inexpensive, costume jewelry ring.

My total finds for about an hour of searching included a quarter, seven dimes, two nickels, 17 pennies, a junk ring, 10 schilling piece, and one coin that was totally encrusted in green, sandy scale.

After the green coin was soaked in fresh water and gently chipped down to the hard metal, it proved to be a Jefferson nickel. The date was 1957, and I assumed that it had been lost for a long time, to accumulate so much scale. This gave me the hope that there might still be some gold left for me. When I saw two other men detecting the same area that night, one in the water and the other on the same section of beach I had been working, I decided to try to beat the crowd the next morning, and make it to the beach by 6:30 a.m.

The plan worked and I could detect some larger areas, but I asked myself, "Is there anything left to be found after the night detecting crews scoured the beaches?" Well, I was going to try my best to find out! The result wasn't exactly a bonanza, but four quarters, four dimes, four nickels, eight pennies and 1 Euro cent turned up before I had to go back to the sight seeing agenda.

I made a commitment to myself to try again to find some more keepers the following morning. Again around 6:30 a.m. I headed for the very end of the beach, an area I'd noticed that other detectorists had seemed to avoid. Maybe they didn't bother working there because it was less crowded and inevitably had less articles to find. Still, if they stayed away from such sections of the beach, maybe there was actually more to find than in the heavily hunted areas.

My deductions were correct: I found a ring within ten minutes. It was silver, not gold, but a ring nonetheless; and I could see a ".925" marking inside the band, "925" signifying sterling silver. No, it didn't pay for the trip, but somehow it made the trip to Hawaii worthwhile. At least now I could tell people of my adventure.

In a short while, another sterling silver ring was in my pocket. This one had some sort of inscripton on the outside of the band, but at the time I could not quite make it out.

I was not done for the day, either. On one of the final passes near the waters edge, another silver target registered. This was a sterling pendant just under the sand. What a great day! In all, I'd scooped up two quarters, seven dimes, three nickels, 13 pennies, two sterling rings and a silver pendant. I was overjoyed and felt that even if I had no more opportunities to detect, the trip had been a rewarding one. The ring with the writing on the band reads, "My Treasure" and has a ".925" inside the band, a fitting end to the day, to say the least.

We left the Island of Oahu after six days of fun in the sun and flew to Maui to finish off our adventure.

The Island of Maui has a more relaxed pace than that of Oahu. We stayed at Lahaina Resort, where the beaches are not protected by walls as they were on the other island. The wave action was literally rolling the beach sand by the pound under the crushing curls of water. The sandy shore was long and sparsely visited by tourists. This made me wonder if I would find anything at all.

I detected the following morning again trying to beat the sunbathers. I found three quarters, two dimes, three nickels, and eight pennies the first day. This gave me hope and encouraged me to try again the next morning.

I tried to cover more area because this was to be the last detecting outing of the vacation and I came away with one Euro dollar, seven quarters, five dimes, 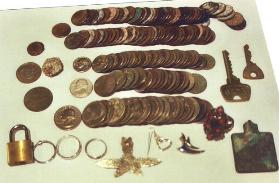 four nickels, 12 pennies and a silver earring. On this trip there's no gold to report, but from what I observed and discovered, there is every reason to expect success in the next session of detecting on salt-water beaches.

I also learned that while a detector can give false signals near the waters edge, if you move to the dry sand, things will usually work out well. If you receive a signal in the salt water or near the waters edge that sounds good and will let you pinpoint the target, dig it up, it will almost certainly be a coin or jewelry.

What's next? I will be investing in a water machine in the near future, and we already have a trip to Florida planned. There's plenty of silver and gold there, too, and I can't wait to go after my share!